A little help from friends 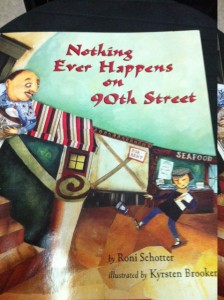 Nothing Ever Happens on 90th Street  by Roni Schotter is a story about a young girl named Eva, who has trouble coming up with something to write about. After she receives some advice from her fellow neighbors she tries to use the advice and has another go at writing.

This book is referenced in writingfix.com as a mentor text when working with the revision stage of the writing process with your students. Below, I will share what I took from this idea and how I implemented it in my Grade 3 classroom.

First, my students were asked to write about a time when nothing happened to them. We brainstormed different possibilities; waiting in the car for mom or dad, waiting in line for lunch, waiting for the school bus. Each student then wrote a draft.

I then read the beginning of the book to the class, including the part where we meet Eva, who is supposed to write about what she knows, but finds nothing ever happens to her. I also read about the advice she received from several of her neighbors.

After that we talked about each neighbor and the advice they gave. 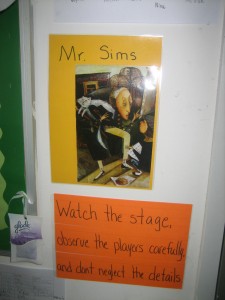 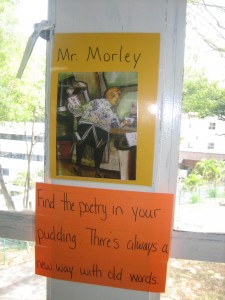 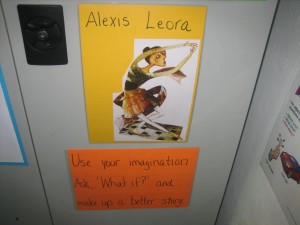 We posted the neighbors and their advice around the classroom for students to refer back to.

After that, I read the rest of the book, and we looked at Eva’s revised writing and tried to figure out whose advice she was using.

I then asked the students to take their draft of a time when nothing happened and visit the neighbors around the room. They were to think about their advice and write down any revision notes in their notebooks. 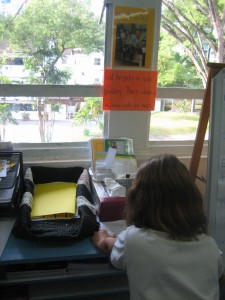 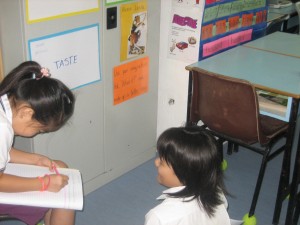 After the students wrote down their notes, they were ready to rewrite a revised piece on a time when nothing happened. They didn’t share with any of their peers whose advice they were using, for a peer would later read their published piece and try to figure out whose advice they followed.

Below you will see a sample of  a draft piece of writing, the notes taken from the neighbors advice, and a revised piece.

These are the notes the student took as she went to visit the neighbors for advice.

Here is her revised version

We were recently practicing for our oral presentations and one of my students said his presentation was too short. Another student, walked over to Mr. Sims on the wall, pointed to him and said, “Mr. Sims would tell you to add more detail!” What a great connection!

The revision stage can be very difficult for students as they are often attached to their draft and don’t want to change anything. After introducing our new neighbors, the students have really begun to understand this stage and how they can revise their writing.

What have other ideas do you have to help students understand revision?

Tweet
This entry was posted in Reading, traits of writing, writing and tagged read aloud, writing. Bookmark the permalink.

1 Response to A little help from friends